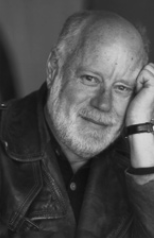 Where would we be if Mr Phillip Adams, radioman, collector of curiosities, curator of Gladdies and Poddies, and general cultural roustabout had taken a conventional life path and kept pretty much to himself? For starters, we’d sound different.

As host of ABC Radio National’s long-running flagship program (their words!) Late Night Live, Phillip simply is, for many listeners, the voice of the ABC.

In measured, resonant tones, he plies his guests with thoughtful interrogation, humour and a seemingly endless supply of anecdotes, allusions and asides that draw the interviewee into his, and the listeners’ confidence. We, the listeners, are privileged to feel complicit as Phillip cajoles the previously unheard from his guests.

And then, apparently at the other end of the cultural spectrum, how much useful vernacular would we have missed out on without the linguistic exuberance of the extraordinary Barry McKenzie? Originally created by Barry Humphries, The Adventures of Barry McKenzie were brought to film, larger-than-life, in 1972 by director Bruce Beresford with Phillip in key role as producer.

Not only a facilitator of conversations, Phillip has contributed many of his own, perhaps most notably via his weekly column in The Australian and more than 20 published books covering topics from the origin of the universe via histories of the Australian media to anthologies of famous jokes. He was behind the Life Be In It and Slip, Slop, Slap campaigns that generated some of the most recognisable slogans of the time, and, without a doubt, contributed to the saving of many lives.

Phillip’s contributions to the world of arts, culture, politics and public life have been recognised far and wide. One above all epitomises his style: the naming of a ‘minor planet’ between the Red Planet, Mars, and the Gas Giant, Jupiter as #5133 Phillipadams, recognising his support for an Australian program looking for near-earth asteroids.

Phillip has been an enthusiastic supporter and promoter of the AFoI since its inception in 1999 by Greg Mackie and a team of reckless visionaries. As we relaunch AFoI into a new era replete with excitement, challenge and uncertainty, nobody embodies our ethos better than that one-man Festival of Ideas, Phillip Andrew Hedley Adams. So it is to him, we proudly and affectionately dedicate the 2016 Adelaide Festival of Ideas.